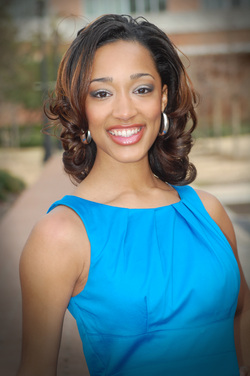 I , Mea E. Ashley, a native of Jackson, Mississippi am the daughter of Mr. and Mrs. Darek  Ashley. I was chosen by my peers to represent the University as Miss Jackson State University 2011-2012.  While enrolled at Jackson State as an honor student, I engaged in many activities. I was a three year member of the "Sonic Boom of the South" Marching Band (JSU Prancing J-Settes), where as a freshman, I had the honor of dancing with my older sister Chloe who was captain, JSU Dance Ensemble, Outspoken Poetry Club, NAACP, National Association of Black Journalists-JSU Chapter, Alpha Lambda Delta Honor Society, Sigma Alpha Pi Leadership Society and Alpha Chi Honor Society and am a member of the Delta Pi Chapter of Delta Sigma Theta Sorority, Inc. I am also a member of the W.E.B. DuBois Honor's College, a three year Dean's List Scholar, Who's Who Among American Colleges and Universities and the recipient of the Emma Bowen Foundation Scholarship. As a student researcher at Jackson State, I chose to study the topic of misogyny in hip hop. My objective was to interview a group of young ladies to learn how they feel about the misogynistic culture of hip hop. I have worked as an intern at television WAPT-Channel 16, the ABC affiliate in Jackson, Mississippi and Mississippi Public Broadcasting (MPB). My duties included special production projects and general assignment reporting. Upon graduation, I  continued my education at Columbia University to receive a Master of Science degree in journalism. On this site you can find every part of my research on misogyny in hip hop. Welcome to my website!