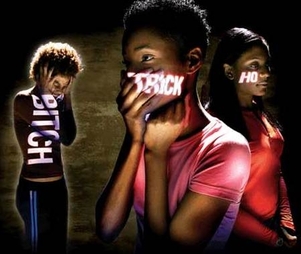 I would like to research misogyny in hip hop and the effect it has on the black females' self-image because music and the media can highly influence those who buy into it. Hip Hop can influence the way we dress, the way we speak, and the way we act. For example when the rapper Jay-Z used to wear his t-shirts draped over his shoulders, the style caught on with all the guys in my middle school. Another way hip hop can influence us is by us catching on to the title or a popular phrase in a song and using it in our everyday vernacular. Hip hop can definitely have an effect on the way adolescents mimic their relationships based off of what they listen to.

I would like to know more about how females react to the misogynistic traditions of hip hop. I am also interested in finding out what influence it has on the way young black females view themselves or other black women. Do black females look up to video vixens the way young boys look up to rappers? Or do they use the stereotype as a motivation of how not to act?

It is important to find out if and how the misogynistic culture of hip hop influences young black females because according to the findings, they could lead to causes of other problems. If the perceptions of young black women in hip hop are negative and young black women are mimicking what they see, then it might make them more prone to self-disrespect, low self-esteem, and disrespect from others. These factors could also lead to domestic violence, rape, and other social ills. All of these things could be connected through the behavior of our young black women.

There is not a dearth of materials on this topic. One of the most well-known studies on this topic is the study of sexual scripts by Stephens and Phillips (2003). A sexual script is a stereotype that embodies the sexuality of a certain type of person. The sexual scripts investigated in this study were the Freak, Diva, Gold-digger, Dyke, Gangsta Bitch, Sistah Savior, Earth Mother, and Baby Mama. As a result of the establishment of these sexual scripts, many other projects have emerged.  There was a recent study on a new sexual script called the Video Girl (Ross & Coleman 2011). There was another similar study with part of the title being Hip Hop Honey or Video Ho . . .(Gourdine & Lemmons 2011). These studies have all investigated the way hip hop affects young black girls. Some of them have focused on pre-adolescents and some have focused on teens. Not as many of the studies have focused on young adults.

With my study being geared more towards young adults, I will add to the body of research in the topic of misogyny in hip hop. The purpose of this project is to research misogyny in hip hop and the effect it has on the black female’s self-image because music and the media can highly influence those exposed to it. Hip Hop can influence the way people dress, speak, and act. This study will observe what influence it has on the way young black females view themselves and or other black women.  My research will also add to the body of scientific research  by exposing how young females accept or decline the misogynistic images in the hip hop culture. If I were analyzing data from this study, I would find out if young girls relate to the behavior and fashion styles of black women in hip hop and do they feel positively or negatively about their actions being influenced by the media. I think the findings in my research will be beneficial to women on the campus of Jackson State University I would love sharing it with my peers.