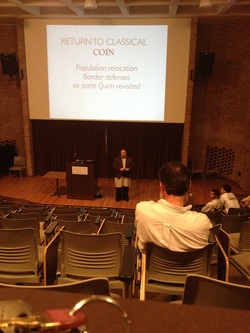 *This research does not pertain to misogyny in hip hop. It was a part of an assignment for class.

I attended a lecture series at Millsaps College. They have lecture series every couple of Fridays out of a month. The lecture that I attended on March 30 was entitled “They Start from the Back of the Neck.” It was a lecture by Dr. Micheal Reinhard, an assistant professor of Political Science at Millsaps. He received his Ph. D. from the University of Chicago in 2004.  His lecture was about his trip to Afghanistan to study higher education.  He talked about the major differences, stereotypes, and history of our education systems versus theirs.  The title of the lecture comes from the way educated people in Afghanistan are killed if they are caught by the Taleban.  The taleban are anti-government and if they catch someone with anything with writing on it, they will assume that person has a connection to the government. The reason for beheading the person starting from the back of the neck is to make the person suffer longer.

The lecture series was only about an hour long. It took place in what seemed to be a music auditorium/lecture hall on Millsap's campus. There were not many people there but there were two other Jackson State students there, Eric Staffney and Carson Ross. The lecture was very informal.  It included a powerpoint, speaker, and the audience was allowed to ask questions throughout the entire presentation.  I noticed that the attire of the Dr. Reinhard was not exactly normal for Americans but at the end of the presentation he explained that it was a custom that he brought back from Afghanistan.

Another myth that he dispelled was the notion of a higher crime and murder rate in Afghanistan than in America.  The facts that many Americans have been killed in the war in Afghanistan, make American people perceive it to be a high risk danger zone.  He talked about how people were reluctant when he mentioned going to Afghanistan because of this notion that Americans have. One of the slides in his presentation showed that the murder rates in some places in the United States are actually close to and some even higher than they are in Afghanistan.  The murder rate in Mississippi in 2007 was 5.07 million. In Afghanistan it was 6.51 million. Dr. Reinhard commented that Chicago’s murder rate would probably be higher than that of Afghanistan’s.  He also stated that only 15% of deaths caused by Taleban come as the result of fighting soldiers. That means that most of the other deaths caused by Taleban are against Afghanistan civilians.